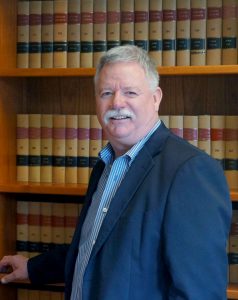 Chris Moore was born in Eugene in 1956 on the same day his mother graduated from the University of Oregon. Although he left town and graduated from the University of Chicago in 1978 with a Bachelor’s degree in politics, economics, rhetoric in law; he returned to Eugene where he attended the University of Oregon law school. While a third-year student, he began working for the law firm of Malagon, Velure & Yates writing appellate briefs at the Workers Compensation Board and Court of Appeals and for disabled Oregonians before U.S. District Court on Social Security Disability cases.

In 1982, he graduated from the University of Oregon School of Law with a Juris Doctorate and began working as an associate for Malagon and Associates. In 1986, Chris was made a partner in that law firm and in 2009, became managing partner of Moore & Jensen.

Chris has tried thousands of cases before the Workers Compensation Board’s Hearings Division and its administrative law judges, and he has represented workers on appeal at the Workers Compensation Board, the Court of Appeals, and the Oregon Supreme Court. Chris has also represented a great many disabled Oregonians before the Social Security Administration on the social security disability and supplemental security income cases.

Chris has been lobbying for the interests of injured workers before Oregon’s legislature and the Management Labor Advisory Committee since 1985.

Chris and his wife, Barb, have lived in Eugene since 1979, where they have successfully raised two children into two wonderful adults. Both have graduated from college, and one received his MBA from Duke University. They are both working on the East Coast.

Chris’s hobbies include cooking, wine tasting, camping, playing with his over-active Labrador retriever and enjoying peace and quiet in the house now that the kids have moved out.