Drones May Be Watching Injured Workers!

I’ve had the pleasure of representing injured workers in Oregon for 36 years now. I have watched with some fascination (and some horror) as technology has drastically changed both the practice of law and the way insurers process workers’ compensation claims.

From the very beginning, I have encountered insurance companies who conduct surveillance on injured workers in an attempt to try to deprive them of benefits.

I did have one instance where the investigator climbed on top of a fence to view my client in her backyard where she was sunbathing, and when she became aware of it became very angry and chased him off of her property. Most of the time, however, most investigators have enough sense to stay off the property.

Recently, however, technology has changed how the investigators are surveilling injured workers. In the past, they would get a van with smoked windows so they could not be observed, and they would film people from hundreds of yards away. With the advent of drones, however, that appears to be changing.

At least on a national basis, drones are being used to investigate injured workers. Knowing that most private investigators are not all that careful about the law, I would advise anyone who observes a drone investigating them to check on a few things.

Drones are not allowed to fly in excess of 100 miles per hour. While homeowners do not own the airspace over their homes, there may be a reasonable expectation of privacy regardless of the fact that the drones could fly over their house. 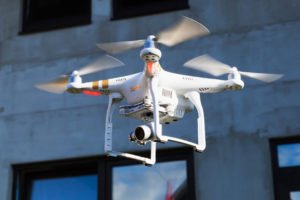 If an investigator is doing commercial work for an insurance company, they should have registered and be flying under which provides waivers to certain small UAS operating rules for pilots.

The waivable sections of Part 107 include:

If someone observes a drone that they think is violating this, they should report that immediately to the local TSA and/or the FAA.

While, as a general rule, people waive their right to privacy and their right to a physician-patient privilege once they file a workers’ compensation claim, they don’t give up all their rights, and they certainly don’t waive federal law, either statute or administrative rule, to allow someone to engage in surveillance in an unsafe or illegal manner.

If you’d like one of our lawyers to evaluate your potential case, please complete the case evaluation form: